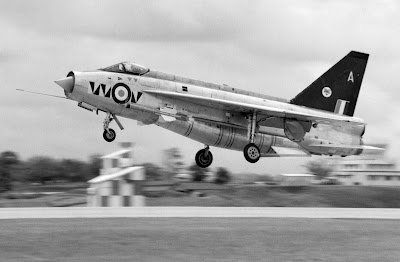 The air base was RAF Tengah on the beautiful island of Singapore. There were a number of flying squadrons on the base. The only one worth talking about as far as I am concerned is 74 “Tiger” Squadron. The reason for my enthusiasm is that the Squadron flew Lightnings, and Lightnings, my friend, are the most exciting arse-kicking aircraft the RAF has ever flown. It was a high speed screaming interceptor. Carrying Red Top missiles, it could launch very rapidly, accelerate like a bat out of hell, gaining altitude with its tail in reheat like some space bound rocket, shoot the enemy plane out of the sky and land before you had the chance to fry an egg! Ok, I know – I’m exaggerating – forget the egg frying; I really meant make beans on toast.

Another reason for my enthusiasm was that I was given a flight in a Lightning.

During my tour of duty, I was called upon to take many photographs for the Squadron, mainly for public relations purposes, while others were taken for engineering maintenance use. One task I was called upon to undertake was to photograph the wreckage and aftermath of a Lightning crash within minutes of the event. This was very sad and traumatic indeed. The pilot, who was a family man, ejected too late and was tragically killed as a result. Even so, he was a hero because he steered the aircraft away from the most populated area to spare the lives of those below. In doing so, he lost his own.

Over time, I built up a special relationship with the Squadron, and any request or opportunity to take photographs for the Squadron I treated with relish. It appeared that the feeling was mutual, as the Squadron decided to treat me to a flight in the “T-Bird” Lightning. (T = trainer, thus it had two seats). This was not to be just any old flight, but a “ten-ton” run (i.e. flying at or above 1000 mph).

I duly showed up first thing in the morning for my pre-flight training and briefing. This was not too arduous as I was assured by the pilot that he would not be pulling too many “Gs.” Even so, I did get a little edgy because he kept talking about WHEN we eject. I questioned him on this and he replied that they always take it that they might have to eject at any time, so it was the best attitude of mind to adopt for such an eventuality. Feeling a little comforted, though not entirely, I was finally kitted up and found myself walking out to the aircraft looking for all the world like something out of “Top Gun.”

I have flown many times in my life, but I have never experienced the sheer acceleration of take-off as I did in the Lightning. It was awesome, and we weren’t even in reheat. The aircraft soared into the sky as I watched the airfield rapidly recede with the roar of the engine behind me. The pilot informed me once we were over Johor Bahru that we were going to climb to operating altitude. We went to reheat. I felt a sudden kick of acceleration while the pilot sat the plane on its tail and we roared at a steep angle to 36,000 feet. Because the cockpit canopy was clear over my head as well as to the forward and sides, I could see the sky darkening as we rapidly climbed into the heavens. I had always wanted to go into space, and unless I can buy a ticket from Mr Branson, this was most likely the closest I will ever get to the experience. We made our way up the west coast of Malaya (as was) and then the pilot gently turned the aircraft around to face south. We began our “ten ton run.”

The pilot radioed the air controllers that we were coming in “fast” – an understatement. I watched the Mach Meter, the instrument which told us how fast we were going in relation to the speed of sound. We went through Mach-1 breaking the sound barrier. The aircraft seemed to give the slightest of shudders – (or was it me shuddering with excitement?) – and all was calm. It was eerily quiet, with very little sensation of speed. The Mach Meter settled on a final speed of Mach 1.58 – that’ll do me Brian!

The pilot then offered me control of the aircraft. This was necessary if I was to qualify for membership of the Ten Ton Club – you had to actually be flying the plane yourself. I carefully grabbed the joystick with my feet gently resting on the rudder pedals. “You have control” said the pilot.

“I have control” I confirmed.

For the next couple of minutes or so I endeavoured to keep the plane straight and level. At this speed, you didn’t want to make any sudden manoeuvres – “fly by wire” was still some way in the future. Presently, the pilot, probably not wanting to push his luck any further, resumed control of the aircraft.

“I have control” he said.

“You have control”, I confirmed, letting go of the joystick.

He explained to me that we would have to lose speed quickly. To achieve this, he took the plane into an “upwards dive”, levelling out at 42,000 feet – nearly in orbit! He then made a series of manoeuvres and finally lined us up with the runway beginning a steep decent towards Tengah.

“You are slightly high on your glide path, adjust our rate of descent.” I heard over the radio. I assumed this was the air controllers out on the hill at Bukit Gombak talking us down. As the airfield loomed larger, the pilot decided to push his luck again, and invited me to pull the black and yellow striped handle to release the drag-chute. This was a special parachute which deployed from the back of the plane once you had touched down to assist in getting the aircraft’s speed down to the point where it could be safely taxied back to the dispersal.

“Whatever you do – DON’T pull it until I say” he instructed. Even with my limited knowledge of aviation skills, the dangers were not lost on me if I should pull it before we had actually touched down!

It has been said that landing a Lightning is more a controlled crash than a normal landing. The end of the runway came up to meet us at frightening speed, and then I was aware of the sudden jolt and screech of tyres on tarmac as we made contact with terra firma.

“NOW!” came the instruction through my head set. I snapped the handle back obediently, and breathed a sigh of relief as I felt the additional negative acceleration induced by the drag-chute.

Some years later, the flight now a distant memory, I photographed a Conversion course group for Phantom pilots who were converting to flying the Tornado.

After the shoot, as I started to walk away, a voice called out to me. I swung around, and there was the pilot who took me up all those years ago. It was wonderful to meet him again, and chat over happy times. In Singapore, he was a young Flying Officer. He was now a Squadron leader.

The Lightning was a wonderful aircraft. I mourn its’ passing.
Posted by Steve at Tuesday, August 12, 2008 No comments:

Many years ago when I was a young airman in Her Majesty’s Royal Air Force, I found myself serving as a photographer at RAF Tengah in Singapore.

One day we had a visit from an Air Marshal. An Air Marshal is an officer of “Air Rank” You can always tell officers of Air Rank because they have the word “Air” at the start of their rank title, a slight give away. In addition, they have lots of “scrambled egg” on the peaks of their hats. They also get paid a hell of a lot more money than most people – consequently they tend to smile a lot, especially when visiting the bank. On this particular occasion I was tasked to take publicity photographs of one such esteemed guest.

At the time, I used a Rolleiflex T twin lens reflex camera. Sometimes I would use my own camera which was a Mamiyaflex C3. The RAF hadn’t discovered colour photography at the time, so my camera was loaded with Kodak Tri-X Pan black and white film. The great thing about this film was that it didn’t matter how badly you cocked up on the exposure, you always seemed to get a good print come what may.

My modus operandi for photographing such visits was to follow the visitor and his entourage fairly closely behind with my camera and flash (Mecablitz 502) raised close to my eye with my finger twitching lightly on the button ready to fire off a shot the moment anything which looked remotely like a half decent picture presented itself in the viewfinder. If I saw they were heading into a certain room I might leap ahead and get a “head on” as they came in the door. This was also a good position to be in if the visitor was glad-handing the incumbent peasant workers, because the alternative was a wonderful photograph of people’s backs. Such shots might be useful today for the highly pretentious “art-house” (fart-house) fine art market, but not good enough for the “Tengah Times” or the RAF News.

The visiting group walked into a hanger. I seem to remember it was the hanger of 74 “Tiger” Squadron, which flew Lightnings, the most fantastic aircraft ever. I am a little biased towards Lightnings because I had a flight in one – but that’s another story. Anyway, I was not terribly familiar with the various rooms hugging the walls of the hanger, so I followed on, taking photographs until I had fired off the twelfth shot on the roll, which meant it was time to pause, and change the film. Keeping an eye on the visiting group and their escorting officers, I noticed they disappeared into a side-room just across the hanger. Hurrying to catch up, I made my way to the doorway with my camera up to my eye ready to take the next picture. I entered the room. In from of me I was confronted by the sight of the Air Marshal et al, relieving themselves at the urinal!

Maybe he thought I was taking the piss. Even so, I was certainly not pulling his plonker!
Posted by Steve at Saturday, August 02, 2008 No comments: