A walk in the Park in Paris 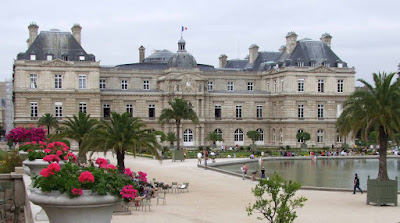 After refreshing ourselves we began walking. We began walking towards the tower of Montparnasse which was signposted. Because it was signposted, we didn't bother looking at the map. This made things that bit more interesting because if you don't know the territory or what lies between you and your destination, then there is the potential for magical and unexpected discoveries to be made.

We walked up along the side of the Odeon theatre, following the signs, across various roads, following the signs, along various streets, still following the signs and came across an elaborate high metal fence with grand ornate gates suggestive of royalty. Looking through the railings we saw what appeared to be a magic garden with elves and unicorns, witches, straw men, and cottages made out of sweets. Well, not really, but it was hot, we were like love-lorn sweethearts walking hand in hand on a magic carpet of expectation in the City of Light, so a little fantasising was understandable. We walked through the gates.

We found ourselves in a beautiful park, none other than the Jardin Du Luxembourg which is the largest park in the city. There before us was the magnificent Palais Du Luxembourg, an impressive palatial building which is today the seat of the Senate, the second chamber of the French parliament. The park and the Palais were created in 1612 for Marie de' Medici who was the widow of Henri IV.

The gardens making up the park are truly lovely with lots of paths to walk along – or jog along such was the wont of some, set amongst wooded and open grassed areas where people lounged picnicking or just frolicking in the Paris sunshine.

There is a large pond, or maybe a lake, depending upon your point of view, to the front of the Palais upon which there floated several model boats hired from a boat vendor by visiting children. 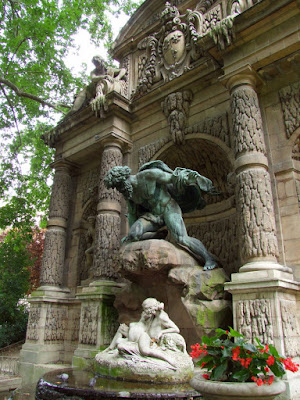 We came upon an enchanting fountain. This was a fantastic baroque work of art, designed in 1624 and known as the Fontaine de Medicis. It is surrounded by trees and located at the end of a small 50 meter long rectangular pond. There is seating provided so you can just sit and admire the fountain and its component sculptures. We spent time slowly walking around it and taking lots of photographs. Its one of those structures which cries out to be photographed as whichever way you look at it, its a picture.

Walking amongst the tree lined paths, I strayed off onto a grassed area to admire a view from a different angle and maybe take a photograph or two. Before I knew what was happening, I was being shooed off and back onto the path by a park patrol man dressed in close to traditional Gendarme (Allo Allo ) apparel. I was a little surprised as there were others walking all over the place as well, and then I noticed that most people were lounging together on areas of grass set aside for that purpose, which of course, my bit of grass was not! At least I wasn't being forcibly escorted out of the park as I witnessed being done to one such critter . I don't know what he'd done but he'd definitely upset somebody. Being a peaceable law abiding sort of guy myself (though I am known to take the odd liberty, so I'm not entirely boring), I found it reassuring that there was this security presence in the park, but at the same time I suppose it was rather sad that it was deemed to be necessary, but that's life. 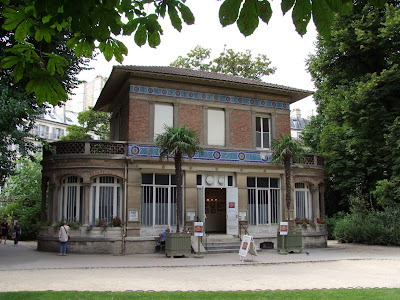 In one corner of the park there was a small and attractive building – a sort of ornamental granny flat type of place. Homing in on it, I realized that there was an art exhibition inside, and the wonderful thing was it was free admission. This, of course, appealed to me a lot as I have a firm belief in not looking a gift horse in the mouth, and safe-guarding my bank balance. My wife followed in after me. All the paintings were by one artist, and I never noted who it was, so I can't tell you, so don't ask! However, the one abiding memory was of very attractive, almost florescently coloured paintings with a certain cartoon and fantasy quality about them. I love looking at paintings, and I often find myself wandering around art shops in shopping malls and other such places. I never buy, as I can never justify the cost to myself, and keep thinking that I ought to take up painting myself and produce my own masterpieces. But of course, I never do.

We returned to the park later after a trip to the roof of the Monparnasse Skyscraper. We were feeling extremely hungry, and tired, so it was nice just to sit and relax on a park bench in a shady spot in the late afternoon Paris sunshine. Indeed, just lazing around as we were seemed to be a pre-occupation with many of the locals as I saw many people sprawled out asleep (or dead??) in various contortions of unconscious bliss throughout the park. We had a “sub” each and a drink bought from the local “Subway”. OK, I know this was Paris and we should have been eating snails, but no – we needed something we could guarantee we could eat. And eat we did – and drink. After a further period of relaxation and contemplation I felt life returning to my otherwise exhausted body, like an empowering river extending to the outer reaches of my resting limbs. The energy had returned along with my will to explore. We headed out of the park towards an imposing domed building straight ahead of us. This was the Pantheon.

Last Friday was my birthday, and my loving wife, who is the best wife in the whole wide world, gave me the city of Paris for a present. Now that, in anybody's estimate has to be a pretty big present. It was. It needed to be if it was to satisfy my wife's desire to make my birthday special, as I am now so old that every additional year survived is a special achievement in itself. This year, my birthday took me to another age with a zero on the end of it, and as everybody knows, it has to be treated with extra specialness. Of course, this is only because we use the decimal system of counting. If we used – for example - the octal system instead, then my birthday would probably not have seemed so special. But we don't use the octal system, and so it was seen as special, and that is why I found myself boarding a Eurostar train at St Pancras International Station on Birthday morning.

Having never set foot in France before, let alone Paris, I felt rather excited. The irony here is that I do tend to travel rather a lot and have travelled great distances to the far reaches of the planet, but the country right next door, just 20 miles or so across the English Channel is one place I had never been. I have even lived for 3 years in Germany, and travelled around the surrounding countries in the process, but never once crossed the French border.

The journey to Paris seemed very short, but then the train was flashing along the rails faster than I have ever experienced on a train before, and so before I knew it we were pulling into Gare Du Nord Station. Like an excited little child, I followed my wife down into the depths of the Paris Metro, and after holding up the queue at a ticket machine as its operation seemed alien to us, we stepped aboard a crowded train with standing room only.

Presently after several stations, we emerged at “Odeon” Station and into the daylight of a busy Paris street. We got lost trying to find the Hotel which we obviously did manage to find (we didn't sleep on the street, though we saw many people who did), and were greeted by a friendly French (what else?) lady receptionist at our homely, small but comfortable hotel in the Latin Quarter of the city, and just a stone's throw from the Odeon Theatre.

We spent the next two and a half days exploring the City, which was amazing. I will explain some of this amazement in future posts, so watch this space.
Posted by Steve at Saturday, August 15, 2009 2 comments: