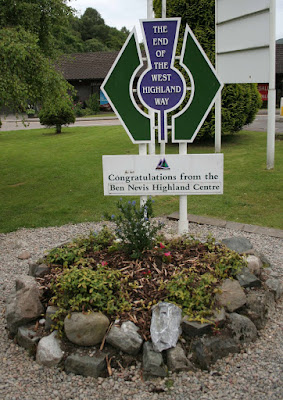 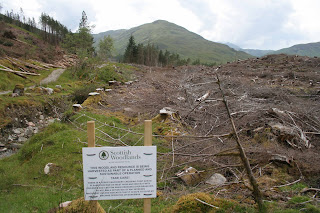 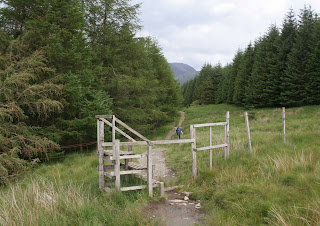 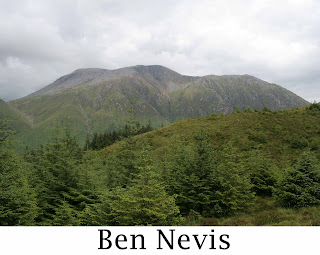 The day started dull and damp.
I decided to get up and go for a walk in the village to wake myself up. It was also an opportunity to capture a few more photographs of Kinlochleven before it receded into a distant memory. It was unlikely I would ever pass this way again. I spent some time on the bridge staring mesmerized by the rushing water gushing down in a boiling torrent from the hydro-electric generator, while the sodden clouds draped their mist over the tops of the soaring slopes above.

Our first priority on leaving the hostel was breakfast. You need energy to walk, so we made a bee-line for the “Ice Factor”, a haven for climbers as it contains the UK's largest artificial climbing wall and an ice wall, but more importantly for us – a restaurant.
Breakfast over, we headed out to rejoin the old military road into the wooded hillside in pursuit of the ultimate goal – completion of the final 16 mile leg to the finish point in Fort William.
It wasn't long before we were high up. And looking back across the valley, we had a wonderful view of Kinlochleven, now receding into the distance. Eventually we emerged into more open territory, devoid of the forestation, our tree lined shelter shielding our view of the landscape.
There is little to say about the final leg in terms of human habitation, as there isn't any until the final few miles. There is evidence of previous habitation at Tigh na Sleubhaich, a remote spot where there are two ruined cottages. A group of mainly middle aged walkers, apparently German, were congregating and showing a lot of interest in the locale, particularly the imposing conical summit of the quartzite mountain, Stob Ban.
As I had been walking at my own pace, oblivious to that of my compatriots, I was very much alone with my thoughts. Every now and again, I sat on my butt and rested, taking in food and drink and allowing my son and nephew to catch up and occasionally pass me by, accompanied by a young lady they befriended and swapping Facebook details so the magic would never die.
This final stage of the walk seemed very long. Fort William seemed an infinity away and would continue so until I caught site of the mighty Ben Nevis. This was significant because it is close to the finish. Also, I am very familiar with the mountain having walked up it several times, even spending a night camping high up at the base of one of its slopes by a lake. So, once I spotted the mountain, I would feel I was on home ground, at the very gates.
And suddenly, there it was. I was looking at it from a perspective I had not seen before, but it was nevertheless unmistakable. I then climbed over a wooden stile and into a managed logging forest, in which I trudged along the narrow and winding path for seemingly mile after mile, out of site of the mighty mountain, until the woodlands abated and I was on a high road above Glen Nevis from where I looked across at Ben Nevis and the tourist track to it's summit, with the distant ant-like figures trecking their way along it.
Presently, I came to the steep track down to the main road running parallel to the river, and made my way to the welcome relief of the visitors' centre. The fizzy drink and the Mars Bar were like nectar in my parched mouth as I awaited the arrival of my comrades. Finally, we were all together again, and the lonely road of desolation lay behind us. We decided we would stick together and finish together. We had started together at Milngavie, and so after all this distance and effort, to finish together was the only fitting end. And end we did, at the well appointed finishing post in Fort William.
Across the road, was a tourist gift shop where we purchased souveniers, though nothing we could buy would be any substitute for the feeling of accomplishment and acheivement, let alone the pain of my still painful left ankle bequeaved to me by the evil horsefly.
I walked slowly, alone, to the Premier Inn where I was greeted by the cheery receptionist. I avoided regailing her with my West Highland Way experiences as I realised she would have heard it all a million times before and I didn't want to be the one responsible for tipping her over the edge into insanity induced by one repetition too many.

--------------------------------------------------
We stayed in Fort William for a couple more days before going our seperate ways homeward bound. My son left the next day, as he was anxious to get home, feeling that to linger another day was a waste of his time. I felt a sense of sadness saying farewell at the railway station, as without him, I would be returning to England alone. Even so, this was Scotland, not Outer Mongolia, so I quickly got a grip of myself.
The next day, on my suggestion, we took a boat trip to “Seal Island”, so called because it is inhabited by – yes, you've guessed it, seals. The boat chugged leisurely along the Loch and we were finally rewarded with a view of about two seals lounging on the rocky islet. Years ago I had made this same trip, and on that occasion there were many seals to be seen, so this was something of a disappointment. Even so, there was the compensation of some splendid views of Ben Nevis and the hills around.
On the boat, there was one final connection and reminder of the walk. On the first stage of the walk, I mentioned that whilst walking with my nephew, we chanced upon a very attractive Swiss girl who was walking under the weight of an enormous rucksack, with whom we made conversation before walking ahead to rejoin our group. I heard my name called. It was my nephew. I swung around to see him seated talking to a very attractive girl. It was the same girl. We made happy conversation and my nephew swapped yet more Facebook details with her, one more link to carry into the future.
Posted by Steve at Monday, February 09, 2009 1 comment:

Steaming back to the Future 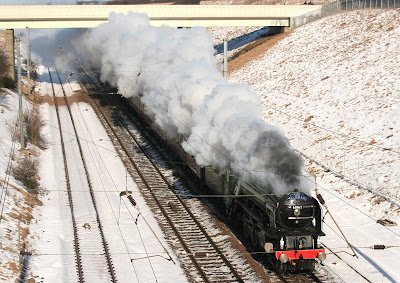 The new "Tornado" steam locomotive passing through Huntingdon yesterday afternoon. Is this the future for our railways? Many would like it to be so. 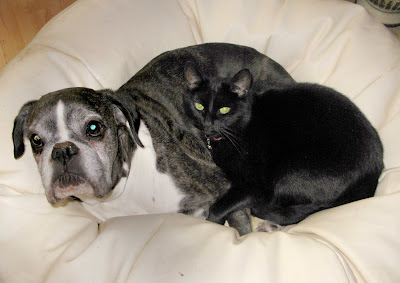 Proof positive that cats and dogs can be friends.
Posted by Steve at Sunday, February 08, 2009 2 comments:

I drove some 100 odd miles this evening. Some of it was through flurrying snow. This was of no surprise to me given the fact that it is winter and February, at that.

And yet, its all over the news like there's something unusual about getting snow in winter. Ok, so its not as common these days, and yes, we might be about to get the biggest blanketing of the stuff for several years. So what? The worst snow we get in this country is as nothing compared to other parts of the planet. If we get a few centimeters its a big deal. Trains stop running, schools close, people stay away from work, and the whole fabric of society breaks down. Are we really such a bunch of wimps?

When I was a child snow was the norm for this time of the year. Our family owned a sled which we used to drag to the shops and pulled the groceries home on it. We coped. Society didn't grind to a standstill. Throwing snowballs, building snowmen and igloos was as normal in the winter as swimming in the sea was in the summer.

Slopping on Your Human Rights

As I was driving down the A1 this morning, my wife alerted my attention to a newspaper article concerning a paedophile who is suing for £5000 because his prison cell does not have a loo. He has to "slop out" every day. He feels his human rights have been violated.
Ok, I hear the cry of "Well, he's a paedo - he gets what he deserves - let him rot" ....etc...etc...
I beg to differ.
I do not care whether you are a criminal of the worst kind, or a king in your palace. Having a pee or the other thing is a basic biological necessity, and everybody has the right to a loo in their place of residence - even if it is a prison cell.
The trouble is, we are supposed to live in a civilized society espousing civilized values. And yet, we still incarcerate people in disgusting cells not fit for a dog and expect them to pee and crap into a stinking pot and then have to suffer the indignity of slopping out the next morning.
Yes, I know its not all like that. Prisoners’ living conditions differ vastly depending upon where they are locked up. I also feel no sympathy at all for the individual making this complaint. He is a monster and in my opinion should be hung, and perhaps that is not severe enough. But that is not the point; I am writing this on a point of principle.
The point I wish to make is that this situation says more about the society we live in than the criminals it imprisons. We are now, in case anyone hasn't noticed, living in the 21st century, and yet we still lock people up in barbaric 19th century penal institutions. This is just not good enough. It is an indictment against our society. If we treat prisoners in an uncivilized way, how do we expect them to be civilized themselves? I'm not saying that they should live in luxury, far from it, but as human beings dealing with fellow human beings there are minimum standards which everyone should be entitled to, and having such a basic thing as a loo in your living space is one of them.
Consider this. Many people locked up in our appalling prison system are completely innocent and should not be there in the first place. They are victims of miscarriages of justice. One day it might be you - or me. Do these people deserve to suffer the disgusting privation of slopping out??? Of course not, and neither should anyone else.
Anyone want to disagree??
Posted by Steve at Sunday, February 01, 2009 1 comment: