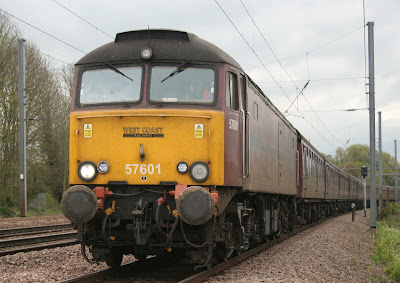 Last Saturday the wonderful new steam locomotive LNER A1 Class 4-6-2 no 60163 Tornado came thundering through Huntingdon. Being forewarned of this wondrous event I dragged myself down to the railway station armed with my new Fujifilm camera. Guess what?? - it was early and I could only stand in frustrated sorrow as it charged through the station before I could get onto the platform, let alone take a photograph. Even so, undaunted, I decided to return in the evening to catch it coming in the opposite direction. Entering the station I joined all the anoraks armed with their video cameras, mobile phones, walkie talkies etc etc....... Now, as I have previously stated, I am not an anorak, honest, and I had no mobile phone, walkie talkie, beard, thick pullover, notebook, or any other such anorak paraphernalia about my person, - just a few details hastily written on a scrap of paper.

The train came through a bit late.

Oh well, back to the drawing board.

I did learn one thing from this experience, and that is my Canon EOS 350D is the best camera I have for doing action shots of steam engines charging along railway lines. The Fujifilm S100 is a wonderful camera, but because of the digital viewfinder and the small delay in the shutter firing after pressing the button does rather throw one in one's action photography exploits!

Sooo...... this Saturday the “Cathedrals Express” BR Britannia Class 7MT 4-6-2 no 70013 Oliver Cromwell steam train was due on its way “oop north”, and I was determined to get the best action shot in the world.....ha ha!!! By the way, I am not an anorak, please understand.

Armed with my trusty EOS, I trudged with a friend for about a mile through Offord Cluny to a really good spot where pedestrians can legally walk across the railway line. I decided, however, it would be safer to photograph the mighty steaming snorter hurtling towards me from the edge of the track rather than standing in the middle of the line, taking the shot, and jumping out of the way at the last moment.

We assumed our positions and waited. And waited. Now, I have got to say there were a fair number of fellow anoraks...er...not “fellow”, sorry, yes, I must remember I am most definitely NOT an anorak.............wondering around with their tripods, video cameras, stills cameras with long extensions, beards, long sideburns, pullovers etc etc assuming various positions from various viewing points. There were also horses around. To relieve the boredom, I struck up a conversation with one, though he was obviously fed up as he had a long face!

I returned to my viewing point. I had the perfect spot. The weather was perfect. The test shots of passing electrics were perfect. Nothing could go wrong.

Presently, a train spotter came up to us and informed us that the steam loco had broken down (dohhh) and so the carriages were now being hauled by a diesel engine instead. Soddit!

For a while, I mused that maybe he was spreading a rumour so that when I left and vacated the perfect viewing spot he would suddenly emerge from a cunning hiding place and assume MY position!!! This would not stand, I decided, and resolved to remain undaunted until said train eventually steamed by.

Finally, it appeared. He wasn't fibbing. An old (though not very) diesel pulling loads of old carraiges came trundling up the line and past us. I held steady, held my nerve, stood my ground, and didn't fire until I saw the whites of the driver's eyes.

I hope you like my shot the Type 57 Diesel Loco, which, as everyone knows, is a re-build using the outer shells of the earlier type 47s which were introduced in the 1960s. The type 57s, of course, ran from 1997 to 2004 when they were withdrawn, though, of course, everyone knows that as well – of course!

I carry a camera with me most places I go.
This is a shot I took in the Galleria, Hatfield one Sunday morning a few minutes before the shops were due to open.
This shot, as far as I am concerned, is like Marmite - you either love it, or you hate it.
I love it.
I like the way the the eye is led to the main hall out of the car parking access hall.
I like the contrast between the foreground artificial lighting, and the reflected daylight, helping to give the picture depth.
I like the feeling of movement with people moving across and away from the camera.
I like the spontaneity of the shot - an everyday scene which hardly anyone would bother to photograph. It is, however, the everyday scenes which we need to record because although they might seem boring and trite to our eyes, in the future they will be a statement of the past.
Ordinarily, the access hall is buzzing with shoppers hustling and bustling. On this occasion, they are not there. The time is not yet right, the rush is not yet, the calm before the rush......
Posted by Steve at Sunday, April 19, 2009 3 comments:

If you have seen the film “2001: A Space Odyssey“, there is a piece of background music by the Hungarian composer Ligeti called “Atmospheres”. Stanley Kubrick, the film's director, found the music so eerie and haunting that he felt it was the perfect background to many of the scenes of loneliness and isolation in the depths of interplanetary space. As a point of interest, he did this without Ligeti's permission. 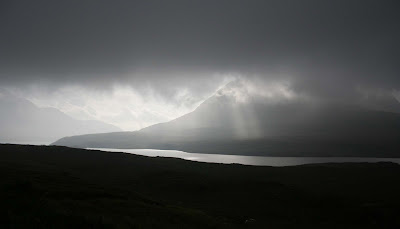 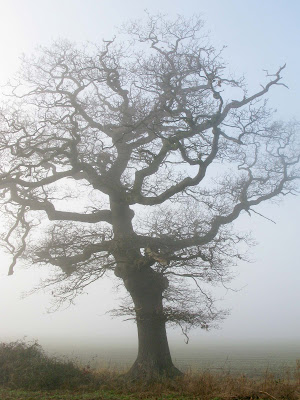 The atmosphere within which we live is perfectly clear - most of the time. However, there are times when it is distinctly misty or foggy. To the keen photographer, these are ideal times for taking atmospheric, moody photographs. The great thing about mist, is that it creates a surreal world where everyday scenes, like trees, buildings, etc. become dislocated from their surroundings giving an air of mystery to the resulting image. Landscapes which are otherwise familiar and unremarkable suddenly take on a different, more ethereal character. A field suddenly has layers of early morning mist hovering over it. Trees loom out of the mist with the background fading away to an indeterminate disappearing point. Leaves and twigs suddenly have diamond like droplets of water clinging to them, and cars appear and disappear by degrees in the all embracing vapour. The world has become Narnia. 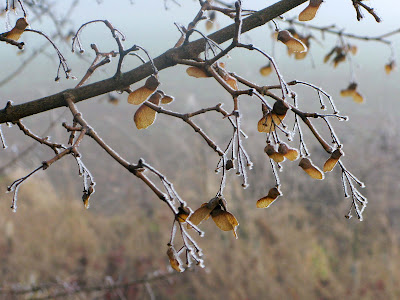 A good time to take atmospheric photographs is around sunrise, and more often in the Winter, though that is not always the case. Early one morning, a couple of years ago, I was taking my wife to work when we felt compelled to stop and admire the view. It was a little misty, and the first glimmerings of sunlight were stretching over the horizon. We parked up off the road and waited, cameras at the ready. Our wait was rewarded by a beautiful sunrise with the sun's golden orb appearing over valleys and hills of mist giving depth and vibrancy to a scene which would otherwise be plain and uninspiring. On another occasion, we drove out down some country lanes bordered by an avenue of trees. In the mist, the trees became like phantoms, detached from normal reality. Close in the branches glistened with water droplets and spiders webs hung like a crystal lattice. 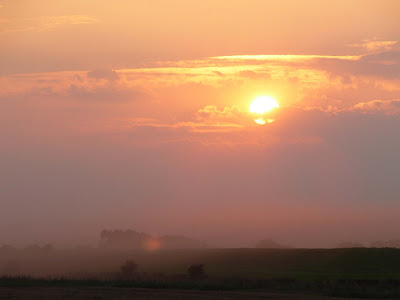 I am not going to suggest any particular technique for achieving this kind of atmospheric photography. I will only say that just because the sun isn't blazing or the hour is not social, the enthusiastic photographer will not be deterred. I can only encourage you to get out in the rain, the mist, the fog and the snow. I once watch a documentary of David Bailey going about and taking photographs for his own edification. He was questioned afterwards if anybody could do likewise. His reply was that yes, anybody could do it, so long as they were prepared to get up off their backsides, and get out there. I agree with the sentiment. Be bold, experiment - and you will be surprised by the results of your creative excursions. You might take a great many photographs and for the most part they may well be disappointing. But in the right conditions, and with the requisite determination and persistence, you may well turn up some gems to be proud of. 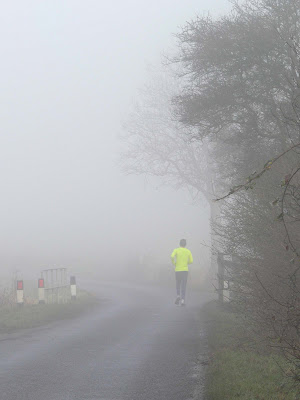 Running was the only sport I was any good at when I was at school. I love the freedom and simplicity of running and have stuck with it , on and off, all my life.

I haven't done any races for a while, so to get back into the fray, I entered the Cambourne 10k race which took place on Sunday 5th April. There were well over 800 entrants and I finished in 321st position, which I was very pleased with given my great age. If you watch the video, I'm the old grey haired codger who manages the sudden burst of speed to gain 3 places just before the finish. 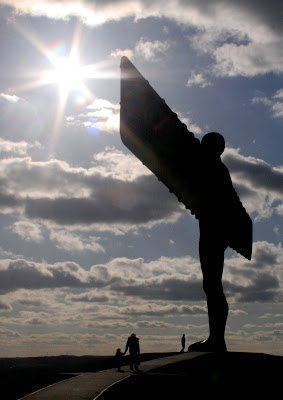 Travelling back from a holiday in Scotland, we spotted Anthony Gormley's amazing sculpture, The Angel of the North. Time to park up and take photographs. My wife and I walked around, under, around again, but not over - that was too hard.
The sun illuminated the fluffy clouds adding drama to shots taken against the sun.
Some hate the statue, but I love it. It stands proud and unmoved by the concerns of Man, and may outlive us as a race.
One day when the Earth is visited by aliens and we are gone, there it will be, a stark symbol of the species which was clever enough to create it, but stupid enough to destroy itself.
Posted by Steve at Thursday, April 09, 2009 1 comment: