Today, I took a trip to the seaside with some family members. Being keen spare-time photographers, my wife and I are currently working our way down 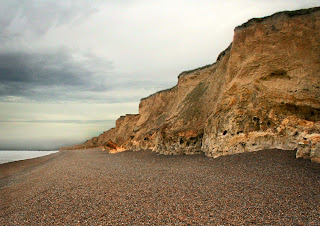 the East Anglian coast and seeing what photographic opportunities present themselves. With all the concern over global warming, I had forgotten all about coastal erosion until it hit me square between the eyes this afternoon. We pulled in and parked the car at Weybourne beach, just west of Sheringham. The sixty pence my son helped me pay for parking was very reasonable compared to the complete rip-off of three pounds stirling at Wells-Next-the-Sea from whence we had just travelled. Anyway, I had seen a lot of evidence of coastal erosion a few weeks ago at Old Hunstanton where the cliffs have receded inland by a few feet over the past few years. However, at Weybourne, it was much more pronounced as the cliffs were far more obviously receding at a fairly rapid rate. What really brought it home was a large house on top of the cliff. This house had clearly, and fairly recently, been set back a fair distance from the edge of the cliff, but the cliff has receded at an alarming rate. Lying at the bottom of the cliff the remains of the garden wall are to be seen, and peering into the garden itself, the rear patio area is cracked up and falling into the sea. Gradually, the cliff is falling away and it is only a matter of time before the old, rambling house itself, takes the final plunge into oblivion. Pondering this, it occurred to me, that it can only be a matter of time before the shore-line villages themselves meet the same fate and become but distant memories. It would appear that there is little we can do about this. The Eastern seaboard is gradually, over geological periods, sinking anyway, while the far north and west rise further up from out of the sea. The country is on a tilt. Add to this climate change, where we are pretty much assured of the prospect ever more violent storms and high tides, and the gradual rise in sea levels, the whole process is set to accelerate. We must adapt to nature. Nature will not adapt to us.