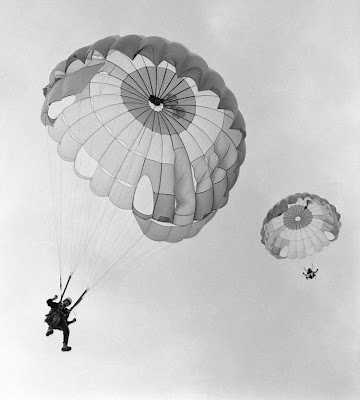 Take me for a trip upon your magic swirling ship

All my senses have been stripped......

Mr Tambourine Man was and still is one of my most favourite songs. It had special significance for me back in the late 60's when I did free fall parachuting in Malaysia. Its lyrics and melody as performed by The Byrds pretty much summed up the way I felt about leaping into space, with nothing to grip onto.... Some people thought I was stupid jumping out of "a perfectly serviceable aeroplane". What they didn't understand was that there is far more to knowing you are alive than just being safe, comfortable and boring. Taking that leap into the void did more for my confidence as an individual than probably anything else I have ever done. I had been attending the parachute club for several weeks, going to classes, learning the theory, learning to pack 'chutes, all the safety checks, practicing steering, landing and emergency techniques from a rig hanging from a tree, and doing parachute landing falls (PLFs). At weekends I would go "up country" with the club to Kluang and assist as a ground crew helper, always thinking it would be a while yet before it would be my turn. Then one day the chief instructor pointed his finger at me and said "you haven't jumped yet - get packed, you're on the next lift". Suddenly play time was over, it was finally for real. In those days we packed our own 'chutes, none of this namby pamby sissy woofter stuff of today where everything is done for you apart from having your arse wiped. No! In those days men were men and women were also men. Obviously, we did get an experienced packer to check it as well, and we did do final "buddy" checks before getting into the plane.
We had a great sense of camaraderie then. I will always have fond memories of one of my friends asking his nervous mate as he clambered into the plane, "can I have your boots when you spear in???" Ah, those were the days!
On my way up to 2800 ft for my first jump, I suddenly had a bout of religion and found myself saying the Lord's Prayer to myself. Thankfully, I'm over it now and if you hear me praying again it will only be under hypnosis! We used to launch ourselves from a Cessna 172. The door was taken off (before the plane took off!) and you would climb out onto the undercarriage step and lean forward holding the wing strut and stare at the horizon though the throttled back propeller. On the command "jump" from the jump master you would launch yourself backwards and assume the "stable spread" position and wait for the parachute to open - if you were on a static line which you were if you were just starting. You would still go through the motions of counting and pretending to pull the rip cord in preparation for real free fall, which usually came after anywhere between 3 to 5 jumps. Anyway, when I felt the jerk of the parachute opening over me for the first time, I just hung up there for the first few seconds in an intense state of ecstatic elation. However, there was one small problem left to overcome, and that was to steer myself towards the target cross laid out on the airfield, and try not to land in power line, trees, roofs of buildings etc. You see, the parachute might be open - but you can still die if you get it wrong!!! At about 400 ft up, the ground seems to start to rush at you. Funnily enough, this sensation is called "ground-rush". You are coming down at about 15 miles per hour vertically, and you have to take into account the wind speed as well. Get it wrong, and landing can be very painful and messy. Anyway, back to 400 ft. At this height you were supposed to steer into wind - which I duly did. This slowed you down. As your feet were about to touch the ground, you would pull down hard on both steering toggles and this would slow you down still further, giving you a soft landing. In my case even though I did all of this, and did the parachute landing fall, I was a bit tense and felt after I hit the deck as if I had jarred every bone in my body. But I didn't care. It was wonderful. It was amazing. I could have been sat in a pub. I could have been at the cinema. I could have been watching television. I could have been reading a book. But no - I wasn't doing any of these things. I was soaring with the eagles. I was looking down on everyone else. I had the wind in my face and nylon above my head. I was REALLY ALIVE!!! I went on to do a few more static line jumps and then progressed onto free-fall. I had now joined a special group of people. We knew what life on the edge was. We knew the thrill of having absolute control over your own destiny. We knew the true meaning of "there's no going back......"
Posted by Steve at Saturday, June 09, 2007