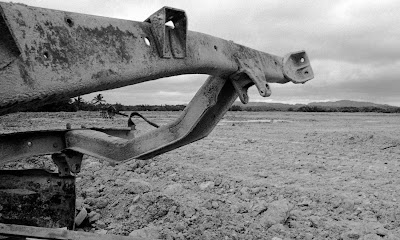 Back in 1970, I was living in Singapore. I was then, and still am a very keen photographer - in fact I can't stop doing it! It was here that I bought myself a Pentax Spotmatic, a through-the-lens-metering 35 mm single lens reflex camera. A friend of mine - Gary - had just bought himself an all black model. I tried to buy one but was unfortunate as they'd sold out, so I bought a standard chrome version. Shade aside, it performed the same, and Gary and I had many happy excursions looking for things upon which to exercise our creative photographic urgings.

One of the things I love about the medium is that it is very individual to the person doing it. This is because we are all different and see things in our own unique way. It’s a bit like modern art. I might see something in an avant-garde picture which fires me, but not you. How often have you looked at a picture or image of some sort and thought "that's a load of crap" while others have stood by, entranced by the very thing you find a complete turn off. Sometimes it helps a person's appreciation of an image to know something about it - how it came to be taken, its history, the photographer's intentions. Photographs are human creations. They come from the mind of the photographer. Yes, the subject has to be there in front of the camera to be photographed, but it is the way - the approach- the photographer takes in making the image which makes the final result so unique - so much a part of the photographer's psyche, which is often lost on the second-party beholder. I am being somewhat of a purist here, in that I am talking about photography as a creative, rather than a recording, or snapshot medium. When we go on holiday and take photographs of the kids on the beach, that’s what I mean by a recording medium - it's simply that - a record, snapshot, of the kids at that moment - or the hotel we stayed in - or the pub we drank in etc…. When a photographer is using a camera creatively, he (or she) is trying to view things in a more thoughtful way. He will look at the subject from different angles with a certain "feeling" in mind he is trying to capture. The photographer may spend, therefore, a seemingly large amount of time just peering through the viewfinder from many different angles and perspectives until he finds the framing which comes closest to what he is trying to capture. He might, and probably will, take several different shots from slightly differing views in order to compare the results later at leisure before making the final selection. I am both a creative and snapshot photographer. Both have value and neither is to be decried.

On a certain day in 1970, in Singapore, Gary and I were out looking for subjects to photograph. We made our way down a narrow road, crowded in and darkened by shading palm trees. The road was trying to be a track, and nearly succeeding. We didn't know where it was leading us. To us it was totally unexplored territory. Presently we came out into a very large, wide expanse of agricultural land. It was land in waiting for the farmer to decide what to do with it. It was in a kind of limbo. It wasn't sure what to do with itself or what it wanted to be. There was lots of grassy and pointy starburst like plants eking an existence in the heated landscape. Most of it, however, was lightly tilled, and stretching off from its edge to the far horizon, with just the odd far off hill peering over the distant enclosing fauna as if to remind us that there was more to this land than the flat expanse framing us. I was feeling quite entranced by the place. It was lonely. I like lonely places. There was only Gary and myself around. No one else existed. The place had a bit of a dream like quality about it. I knew I wanted to come away with a memorable photo which enshrined some of my feeling and innermost impression of the nature of the place. I spotted, lying in the soil, an old piece of iron-work, probably part of the sub frame of a long dead vehicle.

It lay like a rusting skeleton, with elements of stag beetle about it. It reared up out of the ground looking as if it had been there since the land was created. It was part of the landscape and belonged to it. Its functioning days were over - but not quite. It had found a new function in that it gave me a sense of focus to capture something of this silent, lonely landscape. I walked around it considering how I should - if I should - make use of it. Eventually I was drawn to a wide angle view looking along the structure into the surrounding countryside. I noticed that nearby there was an abandoned agricultural tilling wheel, or some such implement in the near distance. I felt it important to include this in the frame as an indicator of the past - and probable future use - of the land. I framed this within an aperture of the metal structure. It is small and does not immediately reveal itself, but lurks surreptitiously to reward the enquiring eye. The frame points out to a frozen timelessness which could go on into a distant future unchanging like lunar soil, defying the intuition which knows better.

I processed the film in Ilford ID -11 developer at a higher temperature than the standard 20 degrees centigrade, due to the fact that tap water flowed out of the faucet at a considerably higher temperature. The development time was adjusted downwards accordingly. I liked the final image, but felt it lacked impact as a small print. I blew it up to twenty inches by sixteen and printed it on Kodak Bromesco paper. Bromesco had a certain magical quality about it. I particularly delighted in the way when it was in the developer the image had a slightly lack-lustre appearance, but once the print was placed under the fix, a sort of "fog" seemed to clear from the surface of the image and the photograph sprang to life, like some life-giving force had suddenly been injected into it. I liked the final result and I displayed it on the wall above my bed, along with other images. I still like it, and it still speaks to me. I do sometimes wander if the land on the image has changed much. My suspicion is that it is now all built upon with high-rise flats which have been built since that day in 1970, to house the ever burgeoning population of Singapore which has multiplied itself many times over since the years I lived there. Everything changes, and surely must - but the spirit of the image lingers on.
Posted by Steve at Sunday, October 14, 2007