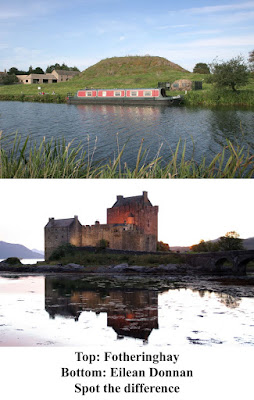 I went to the cinema the other evening to watch "Elizabeth: The Golden Age." I really like Cate Blanchett; I think she is a great actress. The problem I had was did she realise she was being brought in to star in such a comedic film? I enjoyed the film, but probably for the wrong (or maybe the right) reasons.

First off, I nearly fell out of my seat laughing when they showed what was supposed to be Fotheringhay Castle where Mary Queen of Scots was incarcerated and beheaded. Now I have been to the site of this castle as Fotheringhay is no more than fifteen or so miles up the road from where I live. It seems that since 1685, the countryside immediately to the west of Peterborough has gone through a massive geological transformation which only a collision with an asteroid could have accomplished! What we saw in the film was a very dramatic looking castle set on a loch with mountains in the background. Actually, it looked suspiciously like Eilean Donnan Castle on Loch Duich near the Kyle of Lochalsh - if I'm not mistaken. The actual site of Fotheringhay Castle is atop a mound - the castle is no longer there; only a stone remnant with a plaque on it remains. There are no mountains, no loch - only the gently flowing River Nene to one side which is often populated with people fishing in the season. Although I found this massive inaccuracy amusing, it did rather spoil the film for me in that I knew from that point on the rest of the film was going to be a travesty.

Apart from the Queen herself (Elizabeth I that is), the other main character was Sir Walter Raleigh. His relationship with Elizabeth throughout the film seemed to me far too close, unreal, and made up. Also, he never changed his clothes from the start to the finish of the film, and what role did he really play in defeating the Spanish Armada - if any?
Much was made of the battle with the Armada. Little was made of Sir Francis Drake, apart from him hatching his plan to attack the Spanish galleons with fire ships. Despite the dramatic battle scenes we see in the film, and the overdone but cinematically engaging view of the Armada ablaze while our heroic Queen looked on from a cliff top, the main thing historically, which actually did for the Armada was the rough seas, the winds being in the wrong direction, and the storms which caused much foundering amongst the fleet. The remnants limped around the top of Scotland before heading back towards Spain. When Drake sent in the fire ships, the Armada was anchored - taking shelter - off the French coast. Judging from the view Elizabeth had from her cliff-top, the French coast had suddenly moved an awful lot closer to England as the blazing ships appeared to be only a few hundred yards out to sea! It must have been that pesky asteroid again!

I would say, however in conclusion, that if you like a good costume romp with lots of special effects, then don't be put off from seeing this film. Although a little slow in places, it is quite enjoyable, but don't take it too seriously.
Posted by Steve at Sunday, November 18, 2007