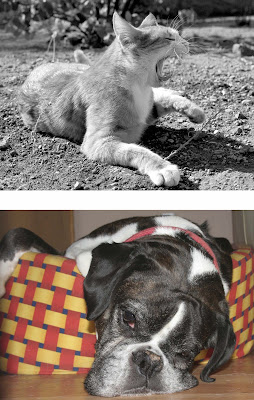 Pets are a very common feature in most peoples family photos - "most people" in this case meaning people who own a camera and at least one pet! If you fall into this category, you are a kindred spirit, but don't let it worry you!

I'm a dog and cat person myself, or more precisely, a boxer and cat person. Now all dogs and cats are like people. They all exhibit different personalities and no one is the same. I know - I've had a number of each - (Dogs and cats that is - not personalities). It seems to me that trying to capture something of their personality in your photos can make the difference between a shot which is both interesting and entertaining - or just plain boring!

When I'm photographing my pets I like to get up close and personal. Getting down to their level can also make a big difference, adding impact to the resulting image. Sometimes, an eyeball to eyeball perspective can also hit the spot!

The two photographs here show Fred the cat and Sally our beloved boxer. I photographed Fred in Cyprus when I was stationed at Ayios Nikolaos with the Air Force. He loved to laze around in the dirt in the heat of the sun. I had intended to get a shot of him sleeping, but he suddenly sat up and let out a big yawn. Siezing the opportunity, I snapped the shot. I entered the photo in a local competition and won! No, I wasn't the only entrant. The other shot, this time of Sally; I took a few months ago for an on-line portrait gallery of rescued dogs run by the rescue association we got her from. When not bouncing excitedly around, she loves to just flop in her bed with her head lolling over the edge. This shot is very typical of the way we see her a lot of the time, and I believe gives a clue to her personality.
Posted by Steve at Saturday, January 19, 2008